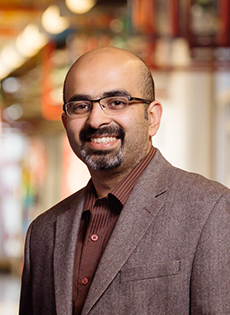 Girish Chowdhary is an assistant professor in the Department of Agricultural and Biological Engineering, Department of Aerospace Engineering, and Coordinated Science Lab at the University of Illinois. He is also the director of the Distributed Autonomous Systems Laboratory, which conducts research in autonomous decision making to enable the next generation of robotic systems. He has been involved in the development of over 15 research unmanned aerial systems (UAS) and is now applying his expertise to lead the development of the TERRA-MEPP robot. Before joining Illinois, he was an assistant professor at Oklahoma State University. He earned his doctorate in aerospace engineering from the Georgia Institute for Technology and went on to be a postdoctoral associate at the Massachusetts Institute of Technology. Girish has authored peer-reviewed publications spanning the areas of adaptive control, fault-tolerant control, autonomy and decision making, machine learning, vision and LIDAR-based perception for UAS, and GPS-denied navigation. He is also a recipient of the Ward Memorial Award by the Aerospace Control and Guidance Systems Committee and the Airforce Young Investigator Award.