EarthSense, a company that develops ultracompact autonomous robots for crop breeders, agronomists, and growers, is the recipient of the second Edwin Moore Family Agriculture Innovation Prize. The award, generously funded by University of Illinois alumni and their families, rewards University of Illinois entrepreneurs focusing on agricultural innovations. [EarthSense, Inc. is a a start-up company that is commercializing some of TERRA-MEPP's technologies.]

Family members Penny DeYoung and Ed Moore presented the award to EarthSense during the Agriculture Technology Innovation Summit on Feb. 28 in Champaign. 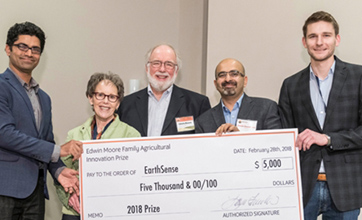 The team who developed the TerraSentia's robotics and machine-vision technology includes CEO Chinmay Soman and CTO Girish Chowdhary, an assistant professor of Agricultural and Biological Engineering at the University of Illinois Urbana-Champaign. The company occupies a lab at EnterpriseWorks, the technology incubator in the Research Park.

The Edwin Moore Agriculture Innovation Fund was established in 2016 with a generous gift to EnterpriseWorks, the University of Illinois at Urbana-Champaign’s technology incubator. Its goal is to encourage startup companies engaged in the development of new innovative technologies that may lead to increased productivity and/or efficiency in farming, or to create new agricultural opportunities, including new processes, new crops, and new food production systems.

In addition to the prize given at the AgTech Innovation Summit, a second Edwin Moore Agriculture Innovation Fund award is at stake as part of the Cozad New Venture Competition, the university’s signature competition for student startups. It will be awarded in April.

The award honors the legacy of Edwin E. Moore (1924), who graduated from the University of Illinois College of Agriculture and began farming in Will County. Throughout his agricultural career, he and wife, Iva, used innovative farming practices for both crop production and livestock management. Two of their four children became farmers, Edwin and Thomas (1953, College of Agriculture), and continued use of innovative farm practices. Subsequent generations of Edwin Moore's family have continued to pursue farming and ag-related careers capturing the same innovative spirit.

By: Research Park at the University of Illinois